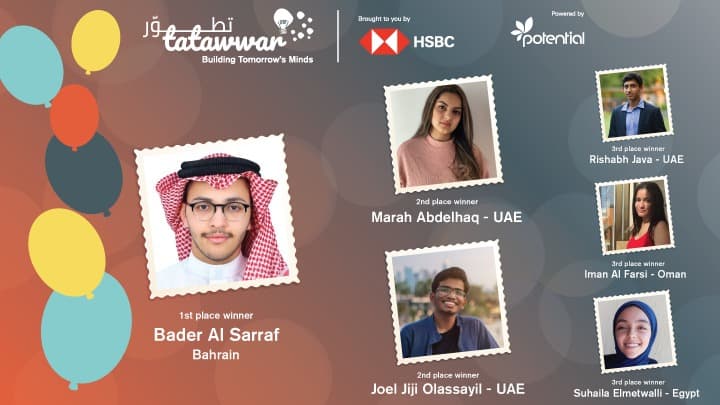 Tatawwar brought to you by HSBC in partnership with Potential.com is supporting the next generation of social innovators

Dubai, UAE, 17 May 2020: Tatawwar: Building Tomorrow’s Minds, from HSBC and Potential.com, have announced the winners of the 2019 / 2020 programme rollout at a live-streamed final awards event. The first prize was awarded to Bader Al Sarraf from Bahrain for his ‘Solar Panel CO2 Converter” project that produces green energy while also reducing CO2 in the air.

“It’s been another fantastic year for the Tatawwar programme where we’ve seen many bright ideas come to life. The students have been able to access numerous resources to help sharpen their future skills and have a real taste of what it means to build a business with social and environment impact,” said Dan Howlett, HSBC’s Regional Head of Commercial Banking, Middle East, North Africa and Turkey.

“We are very pleased that we were able to substantially increase the number of students this year which made it a lot more competitive for the students and allowed them to be innovative and think outside of the box. Congratulations to all the finalists for getting this far and we wish them all the best on their future endeavors,” he added.

This year’s edition of Tatawwar: Building Tomorrow’s Minds has seen a total of 4650 students from over 1000 schools across the Middle East and North Africa region, register in the blended learning programme. The Tatawwar team hosted 12 prototyping workshops for the shortlisted 165 students in each of the programme’s countries in January and February. It was followed by online mentoring to help them develop their prototype and business models before choosing the top 20.

The top 20 who competed in the finals included 2 students from Algeria, 2 from Bahrain, 4 from Egypt, 2 from Kuwait, 1 from Oman, 3 from Qatar, and 6 from the UAE. Over the past weeks, they went through an acceleration programme that included twice-weekly webinars to help project owners fine-tune their pitching skills, and learn key business skills including financial projections, raising funding, future career fitness, technology trends and marketing.

Each webinar brought together international experts on each of these topics to help the students. In addition, each of the top 20 students was provided with four one-on-one coaching sessions and will get a one-year free membership to their local fablabs, where they can continue to develop their prototypes. 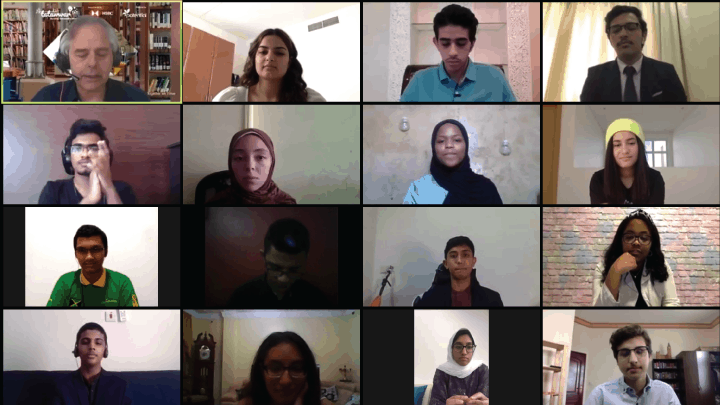 Sabrin Rahman, Regional Head of Corporate Sustainability at HSBC, Middle East, North Africa and Turkey, said, “Tatawaar has put the students at the centre of the self-directed learning – with a wider ecosystem created to support them to flourish which includes mentors and industry experts. This model has been heavily tested with current school closures. The only way to ensure long term success in the face of uncertainty is to embed individual accountability and to develop civic responsibility within our next generation. We are so proud of how the students have risen to the challenge and believe blended learning has a bright future.”

The top six winners’ prototypes will be showcased at the HSBC sponsored UK Pavilion at Expo 2021 Dubai and will also receive USD 12,000 in cash prizes. They will also be supported to crowdfund their projects and develop them further.

Shadi Banna, CEO of Potential.com said: “We are delighted that this blended learning programme delivered on its goal of identifying very talented individuals and supporting them to hone in essential practical skills, while also empowering nearly 5000 students through online learning, resources and tools to help them succeed.”

Tatawwar: Building Tomorrow’s Minds is an interactive online and face-to-face programme that brings together students aged 15 to 18, schools, parents and the business community to innovate for a sustainable future by addressing one of three United Nations’ Sustainable Development Goals:

Two of the Tatawwar previous winners, Samah Abdullah from Egypt and Zoya Naeem from the UAE, have come up with innovative solutions to address the water scarcity challenge and crowdfunded their projects. Samah has developed and just released her first WMS App which is now available for download on the Google Play store.

The next rollout of the Tatawwar programme will commence in mid-September 2020. The finals and highlights from this year’s programme can be watched on the programme’s web page www.tatawwar.com. 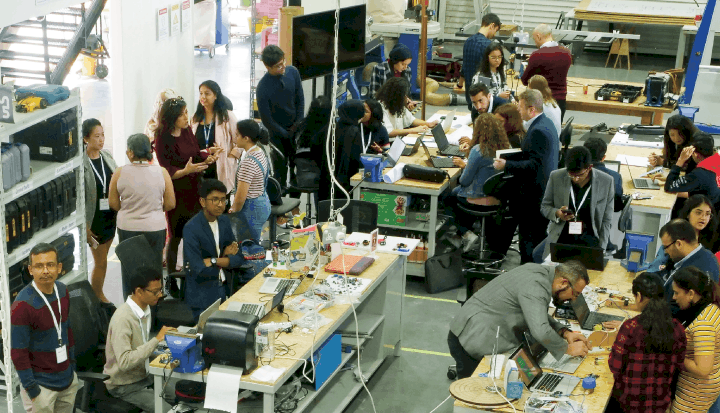 HSBC in the MENAT region

HSBC is the largest and most widely represented international banking organisation in the Middle East, North Africa and Turkey (MENAT), with a presence in 9 countries across the region.  HSBC has operations in the United Arab Emirates, Egypt, Turkey, Qatar, Oman, Bahrain, Kuwait and Algeria. In Saudi Arabia, HSBC is a 29.2% shareholder of Saudi British Bank (SABB), and a 51% shareholder of HSBC Saudi Arabia for investment banking in the Kingdom.

This presence, the widest reach of any international bank in the region, comprises some 350 offices and around 10,500 employees. In the year ending 31st December 2018, HSBC in the MENAT region made a reported profit before tax of US$ 1,557m.

Potential.com is a global EdTech social enterprise that works with individuals, governments and corporates to support key social projects such as job creation, SMB and entrepreneurship development, workforce optimizations and Skills-to-job matching.

Governments and leading brands around the world, rely on Potential.com’s innovative empowerment platform to launch customized initiatives for their citizens and customers by helping them; startup, expand their businesses or enhance their corporate career.